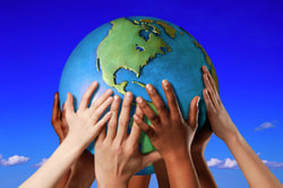 ​Yogis refer to her as Mother. Gaia, our planet Earth, the bearer of gifts both seen and unseen, the root of our being, our sustenance, our inception and survival. It is from her fertile soil that we are born and thrive, our journey taking perpetual shape throughout her seasons. The Sanskrit word asana means, "seat." It is through this seat that we find our connection to Mother Earth and all living beings. Yet, today we are barely functioning in a society and culture of waste and exploitation. Our actions, or lack of action in some cases, compromise the very essence of our existence.  ​
Food and the Environment - by Wendy Elsa Bozzolasco

Our daily food choices have local, national and worldwide impacts on the environment.

The Meat and Dairy Industry:

In recent years, the commercialization of farming has led to what has become known as factory farming. Factory farming began in the 1920s soon after the discovery of vitamins A and D; when these vitamins are added to animal feed, they (animals) no longer require exercise and sunlight for growth. This allowed large numbers of animals to be raised indoors year-round. The greatest problem that was faced in raising these animals indoors was the spread of disease, which was combated in the 1940s with the development of antibiotics. Farmers found they could increase productivity and reduce the operating costs by using mechanization and assembly-line techniques. Unfortunately, this trend of mass production has resulted in incredible pain and suffering for the animals. Animals today raised for food today have had their genes manipulated and (are) pumped full of antibiotics, hormones and other chemicals to encourage high productivity. In the food industry, animals are not considered animals at all; they are food producing machines. They are confined to small cages with metal bars, ammonia-filled air and artificial lighting or no lighting at all. They are subjected to horrible mutilations: beak searing, tail docking, ear cutting and castration. Even the most minimum humane standards proposed are thwarted by the powerful food conglomerates.

The Sierra Club released an article titled Water Sentinels: Factory Farms detailing the impact factory farms have on the environment, which read, in relevant part:
​
"Factory farms generate 500 million tons of manure annually. But, unlike cities that must treat their sewage before discharging it to the environment, CAFOs store their liquefied excrement in large dirt cesspits called lagoons, or in piles of solids called "litter," then spread the raw wastes on surrounding cropland. Ruptured waste pipelines resulting in large spills and polluted runoff after heavy rainfall washes the wastes into waterways, resulting in massive fish kills and dangerous bacterial waters contamination. Air pollution from factory farms contains poisonous gases such as hydrogen sulfide and creates stupefying odors that sicken rural neighbors."

Indeed, the EPA recognized in a 1998 National Water Quality Inventory that agricultural operations, including animal feeding operations (AFOs), are a significant source of water pollution in the United States. States estimate that agriculture contributes in part to the impairment of at least 170,750 river miles, 2,417,801 lake acres, and 1,827 estuary square miles.

Based on USDA figures, the estimated manure output from farm animals in the United States was nearly 1 million US short tons of dry matter per day in 2001. Eighty-six percent of this was estimated to be produced by animals held in confinement.

Factory farming operations can impact the water environment by: depleting limited freshwater sources and by contaminating surrounding surface and groundwater, two phenomena most frequently observed in arid regions and in floodplains, respectively. As well as contamination of water resources occurring either directly, via international discharge of insufficiently treated liquid waste, or indirectly, via infiltration of contaminants into groundwater from unlined waste lagoons, as runoff from locations where solid waste is stored or has been disposed of, and from deposition of airborne contaminants onto surface waters.

Indeed, a single hog produces two to four times the amount of waste as a human produces, while a dairy cow produces 23 times the waste of a human.

What is a Waste Lagoon?

"Most swine and many dairy and egg-laying poultry concentrated animal feeding operations (CAFOs) in the United States collect the waste produced by their animals with scrapers, flushing systems, or gravity flow gutters, and then story the wet livestock manure in cast open-air pits. Producers use a variety of lagoon systems for liquid manure, including anaerobic lagoons, aerobic lagoons, and temporary storage bins. These lagoons have a size as great as six to seven-and-a-half acres and can contain as much as 20 to 45 million gallons of wastewater." Robbin Marks, Cesspools of Shame (2001).

In 2003, California's Chino Basin spent over $1 million to remove nitrates, which can cause "Blue Baby Syndrome," from its drinking water. The source of the nitrates was found to be local dairy farms and the manure they produce.

Between 1995 and 1998 , factory farms were responsible for more than 1,00 spills of liquefied manure. In 2005, a manure lagoon from a dairy farm in Upstate New York burst and leaked into the Black River, killing over 375,000 fish.

The Meat Industry and Climate Change:

The Pew Commission Report found that "industrial agriculture may be a significant contributor to climate change, as the production of greenhouse gases from these facilities (both from the animals themselves and from the decomposition of their waste) is significant."

Beef production results in rampant deforestation of the Amazon, where land is being cleared to grow only feed crops to be fed to animals. David Kaminowitz, general director of the Center for International Forestry Research, reported in 2004 that rapid growth in Brazilian beef overseas has been accelerating destruction of the Amazon and that the area of forest loss increased from 41.5 million hectacres in 1990 to 58.7 million hectacres - an area twice the size of Portugal - in 2000. Since these areas act as a carbon sink, that soak up and sequester CO2, this deforestation has the practical effect of releasing 2.4 billion tons of CO2 into the atmosphere.

Switching from beef to chicken will not lessen your carbon footprint. You could drive to the moon and back 114,000 times and still have released less carbon than the United States chicken industry releases annually. Production of chickens for consumption in the United States for the year 2010 released the same CO2 as driving 55,800,000 miles in a 24-mpg car.

Animal Farts and the Environment - Yep, you read that right:

Ruminant animals, like cows, that are factory farmed are fed a steady, unnatural diet of corn and soy beans. This unnatural diet disrupts the natural function (known as energetic fermentation) of the animals' digestive system, which results in. . . you guessed it:  farts. Now, just one cow farting isn't the problem. It is the collective farts of over 1 billion ruminants worldwide that has the effect of producing 86 million tons of methane worldwide.

Food Transportation and the Environment:

The world's food market has become increasingly globalized. This means that we now have access to grapes from Chile, beef from Brazil, and dairy from Australia. This globalization has resulted in a "de-seasonalization" of food. This means that in our daily lives we have access to foods, like coconuts and kumquats outside of their traditional seasons, based largely in part due to the fact that they can be grown in other countries with appropriate climates and shipped to us.

Tools have become available to help you determine the carbon-costs of the food you consume. Here are some examples of such transportation costs that were reached using Bon Appetite's carbon calculator.

What Can You Do?