Professor Francione received his B.A. in philosophy from the University of Rochester and his M.A. in philosophy and his J.D. from the University of Virginia. He studied philosophy in Great Britain as Phi Beta Kappa Scholar. He was articles editor of the Virginia Law Review. After graduation, he clerked for the late Judge Albert Tate, Jr., U.S. Court of Appeals for the Fifth Circuit, and for Justice Sandra Day O’Connor of the U.S. Supreme Court. He practiced law in New York City before joining the faculty at the University of Pennsylvania Law School in 1984, where he was tenured in 1987. He joined the Rutgers faculty in 1989.

Professor Francione has been teaching animal rights theory and the law for more than 25 years. He has lectured on the topic throughout the United States, Canada, and Europe, and has been a guest on numerous radio and television shows. He is well known throughout the animal protection movement for his criticism of animal welfare law and the property status of nonhuman animals, and for his theory of animal rights.

He is the author of numerous books and articles on animal rights theory and animals and the law. His most recent book, co-authored with Anna E. Charlton, is Eat Like You Care: An Examination of the Morality of Eating Animals. His other books include The Animal Rights Debate: Abolition or Regulation?, which was published in 2010 by Columbia University Press; Animals as Persons: Essays on the Abolition of Animal Exploitation (2008); Introduction to Animal Rights: Your Child or the Dog? (2000); Animals, Property, and the Law (1995); Rain Without Thunder: The Ideology of the Animal Rights Movement (1996); and Vivisection and Dissection in the Classroom: A Guide to Conscientious Objection (with Anna E. Charlton) (1992).

Professor Francione is the co-editor (with Professor Gary Steiner) of a series, Critical Perspectives on Animals: Theory, Culture, Science and Law, published by Columbia University Press. He has also written in the areas of copyright, patent law, and law and science.

Professor Francione and his colleague, Adjunct Professor Anna Charlton, started and operated the Rutgers Animal Rights Law Clinic from 1990-2000, making Rutgers the first university in the U.S. to have animal rights law as part of the regular academic curriculum and to award students academic credit, not only for classroom work, but also for work on actual cases involving animal issues. Professor Francione currently teaches (with Adjunct Professor Charlton) a course on human rights and animal rights, and a seminar on animal rights theory and the law. 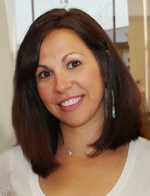 Erica is a writer, columnist (Expanding The Circle) and Editor-at-large for Creations Magazine, as well as a long-time certified yoga teacher and animal lover, rescuer, caretaker, and activist.

In college she studied Comparative Psychology and Animal Behavior, as well as Veterinary Technology Science. After working in the animal medical field for many years, she began her journey into animal rescue and rehabilitation. She has worked and volunteered for numerous animal shelters and rescue groups, serving most recently as an Animal Support Services Manager, where she was responsible for the support and ongoing care of over 300 shelter dogs and cats.

A long-time vegetarian turned passionate, ethical vegan, Erica founded Karuna For Animals, an educational and advocacy organization that works to promote compassion, non-violence, and kindness for not just some, but all animals--for all living beings--in 2010. After participating in one-too-many shelter events designed to save the lives of as many dogs and cats as possible, yet at the same time, selling hotdogs and hamburgers in the parking lot, she could no longer stand the hypocrisy or disconnection.

In 2013, Erica and the amazing Karuna Team organized and presented the first Long Island Animal Rights & VegFest. In 2014, they co-organized and presented the first Long Island Vegan Living Program, as well as the upcoming Karuna Yoga & World Peace Day, with guest speaker, Dr. Will Tuttle, and the Long Island Animal Rights & Vegan Education Conference, featuring keynote speaker, Professor Gary Francione. And in 2015, they will be responsible for presenting a stellar, one-of-a-kind Kids Yoga and Humane Education Summer Camp, as well as the first Karuna Yoga & World Peace Festival. The longterm goal of the organization is to raise enough awareness and funds to begin to rescue and rehabilitate animals of all species.

Erica is also the author of the children's book, "I Am Everything and Everything Is Me," which is part of the Karuna For Animal's Kids Yoga and Humane Education program curriculum, and is currently at work on a book of essays.

Kathy Stevens is the founder and director of Catskill Animal Sanctuary, located in Saugerties, NY. Since its founding in 2001, CAS has become one of the nation’s leading sanctuaries for farmed animals, as well as a center to raise awareness of their plight and of the imperative of a plant-based diet.  It has saved close to 3,000 animals through direct rescue, and countless more through signature programs that help people in their journey toward veganism.

A passionate but patient advocate of the vegan lifestyle, Kathy presents her message of “kindness to all” through her Huffington Post blog, her critically and commercially acclaimed book Where the Blind Horse Sings, and her new book, Animal Camp: Reflections on a Decade of Love, Hope, and Veganism at Catskill Animal Sanctuary, as well as at kindergartens, colleges, national conferences and everything in between.

Kathy lives on the grounds of Catskill Animal Sanctuary with her dog Chumbley and her cats Fat Boy and Mouse, and can regularly be found giving tours of the sanctuary or hugging her animal friends. 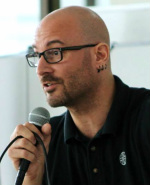 Demosthenes Maratos serves as the Communications Director at the Sustainability Institute at Molloy College, where he has been employed since 2009. Demosthenes has worked in the field of environmental and public policy since 1989. He began his career with the Long Island Neighborhood Network, the New York region’s largest and most active environmental advocacy organization. There, in addition to many successful efforts, he campaigned for the two most significant pieces of pesticide legislation in New York State history - the Neighbor Notification of Pesticide Spraying law and the Safe School Grounds law.

Now with the Sustainability Institute at Molloy College, Demosthenes is part of a team that provides community education and fosters informed debate on key issues related to sustainability. His work also includes integrating concepts of sustainability, environmental protection, and veganism into the curriculum, operations and culture at Molloy College and the larger Long Island community. He hosts the Sustainability Institute’s Sustainable Living Film Series that boasts an entirely vegan menu at each screening, and makes the ethics and environmental benefits of veganism a central focus of each event.

Demosthenes holds degrees in Sociology and Business Management from St. John’s University. He has been an ethical vegan since 1989.