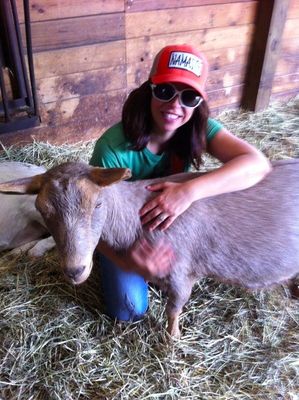 ​​Karuna For Animals: Compassion In Action, Inc.​ is a yoga-based, 501(c)3 non-profit organization that was founded in 2010 by Erica Settino after years of working in domestic animal rescue, advocacy and welfare, and witnessing the sadly prevalent disconnection in the movement. Also, a yoga practitioner and teacher for almost a decade at that time, Erica began using the ancient teachings of yoga as the foundation for her activism.

Utilizing her varied and eclectic education and experience, Erica draws from both her traditional education, in which she holds a BA in Psychology (Human Growth and Development/Minor in Animal Behavior) an MFA in Creative Non-Fiction Writing, and ongoing graduate work in Disability Studies, as well as her decades-long study and practice of the systems of yoga, in an effort to promote awareness around the injustices that humans and animals of all species face every single day.

With the inception of her organization, Erica was able to extend her activism and educational efforts in a much more inclusive way. No longer having to settle for advocating for individual groups, when it is much more just and morally consistent to speak out on behalf of all. To that end, it is the aim of the organization to advocate for the rights of all living beings.

Our members and supporters seek to promote compassion (karuna), nonviolence (ahimsa) and freedom from suffering (moksha) for animals of all species--including humans; especially the most marginalized amongst us!! It is our mission to raise awareness and funds for the rights of all animals through a dedicated practice of the science of yoga, the promotion of veganism through vegan education, community outreach, humane education, events and workshops. It is our hope that our efforts will aid in cultivating the awareness that our differences are not reason to harm, exploit, and oppress. But instead are cause for great celebration. In Erica's words, "Oppression of any kind, is an oppression of all kinds. We are all unique. And when looking at what really matters, completely the same."